China is growing its domestic development competence in electrification, and at the same time opening up to external competitors. This year’s CTI SYMPOSIUM CHINA featured even more electrification-related topics – and even more internationalization.

For the first time, the CTI SYMPOSIUM CHINA was held under a new name: ‘Automotive Drivetrains, Intelligent and Electrified’. However, it is not turning away from transmissions, the symposium makes them part of a bigger picture. Almost four in five lectures dealt with electric and hybridized drives, as well as with development software, drive integration, calibration, or operating strategies.

As of 2019, automotive manufacturers must meet stricter annual quotas for New Energy Vehicles (NEV) in China. Under the Credits system, pure electric vehicles get more points than plug-in hybrids (see p. 81, CTI Mag 12/2017). But alongside its stick-and-carrot approach to electric drives, the Chinese government is also relaxing the rules elsewhere, as announced in April 2018. As of 2020 Joint Venture Compulsion will be dropped, meaning foreign manufacturers can offer electric and hybrid automobiles without a Chinese partner.

Under the incremental opening process, which starts with commercial vehicles and extends to passenger cars in 2022, the Chinese industry will square up to the competition and accelerate towards the long-term goal of emissions-free mobility. After the announcement in spring, there was much speculation about what was behind the easing of the rules. Some see it as a concession to the USA, others believe China wants to suppress uncontrolled growth in the electrification sector – by enabling more competition and hence, faster market consolidation.

Prof. Küçükay quoted a Wall Street Journal article saying there are currently 487 companies producing automobiles in China. Of these, 357 are ‘newcomers’ and just 130 are ‘old’ companies – a huge number in itself. David Lu compared this to the 1920s in the USA, where there were 200 auto companies, and the 1960s in Germany, when it still had lots of short-run manufacturers. Today, only a small fraction remains. Will China’s 487 auto manufacturers survive? 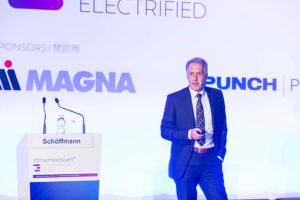 Michael Schöffmann thinks not all of them will. As he pointed out, there is more to automobiles than drivetrains alone – you have to master topics like crash protection etcetera too. Gerhard Henning, CTO of the newly-founded FECO Transmission System Corp. Ltd (a subsidiary of Great Wall Motor) added that on top of production, you also have to master sectors like sales and servicing; these call for tremendous expertise that start-ups could hardly be expected to have. David Lu said efficient mass production and profitability were ‘serious’ challenges among competitors that also applied to newcomers. Tesla, for example, had been on the market for quite a while, but was basically dependent on external capital, meaning stocks and shares. Zijing Lin, the Transmission chief engineer of sports car engineering Company CH-Auto Technology, agreed, but emphasized that fresh impulses from start-ups can also accelerate development.

The general consensus was that China would probably follow in the footsteps of Europe and the USA. Small, innovative companies would cooperate with, and often be absorbed by, established players. Providing rules and technologies in cost-critical sectors such as auto production do not change completely, the high number of manufacturers – nearly 500 – would drop long term.

How many speeds for electric drives?

As in previous years, the panel also discussed how many speeds make sense in conventional drives, and now in electrified drives too. The debate over 10 or even 11 ratios for conventional drives seems to be over; not one of the conventional step transmissions presented in Shanghai (Aisin, Opel/PSA) had more than 8 gears. Schöffmann said what really matters is spread, so the number of ratios basically follows the usable engine spread. And since most countries apart from Germany now had speed limits of around 120 km/h, there were hardly any applications for more than eight gears. For Schöffmann, improving internal efficiency is more important – for example by improving hydraulics and reducing friction loss.

What about pure electric drives? As Gerhard Henning sees it, only vehicles that go faster than 160 km/h really need two ratios. Schöffmann noted that in two-speed setups (several electric rear axle drives were shown in Shanghai), the biggest challenge was the large gap between ratios. Particularly with electric drives, comfort requirements were so high that ‘shift shocks’ were not acceptable. Hence, avoiding torque interruption when shifting under load would be a big challenge. 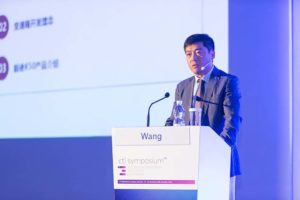 Kejian Wang, President at CH-Auto Technology, cited the same challenge in his plenary lecture incidentally. The Roadster K50 he presented does 0-100 km/h in 4.6 seconds, has an electric range of 420 km, weighs 800 kg – and has just one gear. Wang said the next model would have two ratios, ideally as an AMT – a real challenge as said above. Wang said longer-term however, the company is also considering multispeed transmissions with planetary gear sets.

How much electrification is right?

As mentioned earlier, China only issues Credits for vehicles with pure-electric drivability; ‘conventional’ hybrids have no benefits in terms of quotas. Yet most forecasts agree that even in 2030, at least 70 percent of the world’s automobiles will still have a combustion engine, increasingly as part of a hybrid drive. 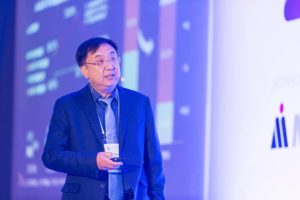 One question the panel asked was how much sense 48V hybrids make in China. David Lu said there were no direct incentives, but the technology would obviously reduce consumption for the great majority of vehicles, which in the short term would not be NEVs in China either. This is why Michael Schöffmann sees 48V in general as a ‘must’ for reducing CO2. However, Gerhard Henning pointed out that China’s tech-savvy consumers want to ‘see’ the hybrid, and benefits need to be really tangible.

According to Zijing Lin, drives with no pure-electric mode will dominate for a long time, and we need solutions there too. The bottleneck, he said, was still the battery with its low energy density and very long charging times. At this point Michael Schöffmann raised the idea of CO2-neutral e-fuels again; so far, these do not earn credits or incentives anywhere, including China. He also noted that hydrogen enables much faster refuelling. Prof. Küçükay said the 350 kW chargers currently being installed in Germany, for example, can solve recharging issues to an extent, but also reduce efficiency to 70 percent. So for now, the general dilemma still applies in China too: the only real benefit of pure electric drives is that they are local emissions-free.

Another well-attended symposium event was the press conference, where one journalist raised the question of battery CO2 footprints. Symposium chair Prof. Küçükay said if you only consider production, EVs need twice as much energy as conventional automobiles. The complexities of battery manufacturing are the main factor, and account for 40 percent of production energy. In countries like Norway that use virtually 100 percent renewables, he said, that would not be an issue. But in countries with more coal in the mix, such as China, things were different. Given a European energy mix, a C-segment EV ‘emits’ 107 g/km of CO2 over its entire lifecycle; in China that figure is 170 g/km, compared to just 161 g/km for a conventional automobile.

China is setting the pace

What were the take-home impressions from this year’s symposium under its new name ‘Automotive Drivetrains, Intelligent and Electrified’? With 630 participants, it was bigger once again. But for conference director Sylvia Zenzinger, the quality of the Shanghai event was more important than quantity. She was particularly pleased at the growing number of Chinese speakers and participants – a reflection of the extensive expertise in the Chinese automotive industry.

Lectures on electric drives and components now play a much bigger role. Opening the market so international vendors can operate independently will probably further accelerate innovation in the sector. We are experiencing an exciting growth phase with an incredibly diverse range of participants. It is hard to predict whether and when consolidation might occur, as it did in Europe and America. But two things are certain: China is setting the pace in electrified drives, and the CTI SYMPOSIUM CHINA is more important than ever in an international context.