Oil company BP began publishing its annual ‘Energy Outlook’ in 2012. In Shanghai, David Hall presented extracts from the latest edition. Since any predictions for 2040 are obviously a long shot, Hall presented four different scenarios. In the worst case (’More Energy’), CO2 emissions would increase in an almost linear way. In the two scenarios ‘Evolving Transition’ and ‘Less Globalization’, CO2 levels would remain steady.Only in ‘Rapid Transition’ would today’s CO2 emissions be reduced by around half. The speaker said that would require a broad shift away from coal, significantly less use of oil and strong growth in renewables, including biofuels as well as wind, solar and geothermal. Autonomous driving and more car sharing would electrify 15 % of vehicle inventories, but these would account for about 25 % of mileage. Subsidies could also help by replacing older vehicles with electrified cars. “We can achieve our goals if we focus on powertrain efficiency, electrification and lower carbon fuels – and manage the inventory of old and new vehicles properly.” David Hall said he does not think electrification will put BP or its subsidiary Castrol out of business. New coolants and lubricants would be needed to handle higher loads from e-drive shifting, and battery cooling is also a new field of activity. Hall said BP itself is increasingly shifting its business away from oil. Natural gas is playing a bigger role thanks to its more favourable CO2 balance, and the company is also investing in wind power. Moreover, he said, BP is the world’s largest producer of biofuels. For mid-2025, the speaker announced a commercial project for CO2 capturing – a key requirement for producing carbon-neutral e-fuels. 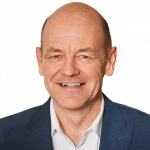