Abstract
Truck and bus manufacturers have been constantly facing an issue to disassemble the rear axle shaft from the hub when transporting the truck from the factory to the dealership. In addition to that, the dealerships have the very same problem every time they have to replace the brake pads in some truck models, which leads to excessive service time, extra costs and aftermarket complaints. The current problematic fastening system is composed by a lock nut, a flat washer and a coned slotted bushing. The concept of this 30 year old design involves the coned slotted bushing being pressed against a tapered hole on the shaft’s flange. After tightening the lock nut, the bushing clamps towards the stud and it gets stuck in between the shaft and the stud generating the problem described above. This paper shows the R&D process that Tekfor used to come up with the solution named iLok™ nut that replaces the problematic 3-piece fastening system. The methodology involved (a) Innovation process; (b) CAD modeling; (c) Finite Element Analysis; (d) Forging simulations; (e) Forging trials; (f) Prototypes manufacturing; (g) Torque and tension tests; (h) Junker vibration tests; (i) Proof load test; (j) Salt spray test; (k) Fit and function test, etc. The iLok™ nut showed superior performance in all these tests and its usage brings multiple benefits to OEMs, Tiers 1 suppliers, Dealerships and end users. This is the most important innovation of a nut for the automotive industry since the advent of the wheel nut in 1972.

Introduction
For more than 30 years, OEMs, Tier 1 suppliers, dealerships, truck fleet owners, and end users have been facing issues with a problematic 3-piece fastening system that connects the rear axle shaft on the hub of most class 6, 7, and 8 trucks across the globe [1]. The 3-piece system is composed by a lock nut, a flat washer and a coned bushing that can be slotted or not as shown on Figure 1. Depending on the truck model, the flat washer is not used and the system is reduced to a 2-piece configuration commonly found in European trucks. 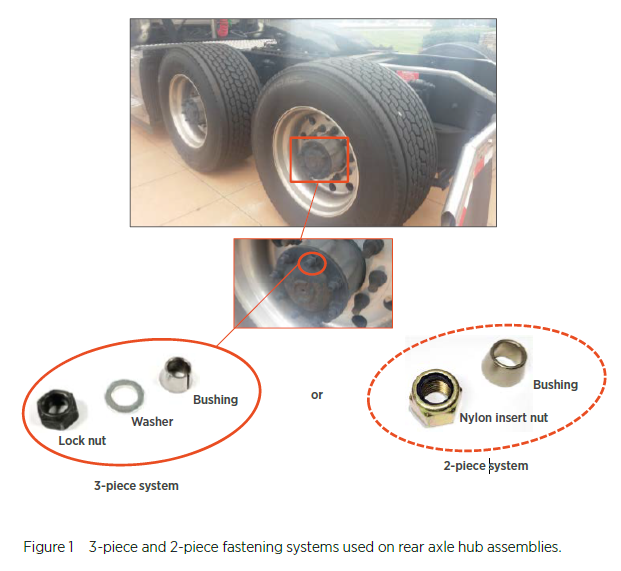 In spite of that, both 2-piece and 3-piece systems present the same issue of the coned bushing getting stuck in between the flange and the stud when the shaft has to be pulled off the hub during the truck’s transportation from the assembly line to the dealership, or during maintenance to replace brake pads in some truck models. This issue causes OEMs, Tier 1, and Dealerships to waste a considerable amount of time and money to disassemble the rear axle shaft from the hub. Moreover, the struggle faced during the disassembly process often results in some sort of re-work or re-paint on the shaft, or other components, due to scratches, dings, and nicks, which generates more and more costs that are cascaded through the entire supply chain. In addition to that, another issue caused by the 3-piece or 2-piece system is when the press fit between the locking feature of the nut and studs gets too tight. This issue leads to the removal of the phosphate coating from the stud threads, which causes premature corrosion of the fasteners in the field. All these extra costs caused by inefficiencies and re-work are transferred to the end user who buys the trucks.

Figure 2 shows two mechanics struggling to pull the shaft off the hub as well as the tools commonly used during service. This is the same struggle that shop floor operators face to pull the shaft off the hub at the end of the assembly line in preparation to transport the truck from the factory to the dealership. The disassembly time varies from unit to unit, but usually it is a time consuming process. For instance, it took two mechanics, nine tools, and approximately ninety minutes to disassemble the rear axle hub shown on Figure 2 in order to replace the brake pads. 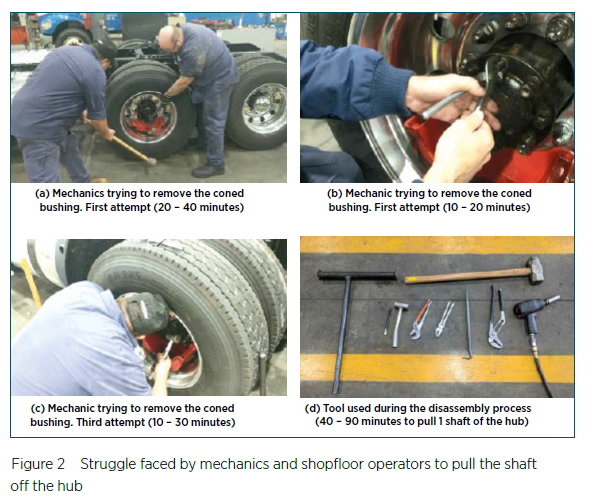 This paper shows the research and development process used to come up with a 1-piece solution that replaces the problematic 3-piece and 2-piece fastening systems.

Analysis of the 3-piece fastening system
The initial step for designing a new fastener is to understand how much clamping force the joint needs in order to secure a proper and reliable fastening system. This information is rarely available because OEMs often specify torque and rotational speed as the installation parameters rather than clamping force. In other words, OEMs and Tier 1 suppliers often have a good understanding of the required installation torque and speed for a given joint, but they rarely know how much clamping force is actually  needed to secure that joint. With that being said, the actual clamping force at the rear axle hub assembly joint can either be measured with an ultrasound equipment, or it can be calculated through a torque and tension test based on the installation parameters used at the assembly line. Figure 3 shows the assembly process of the 3-piece fastening system often used by North American trucks. The installation torque and speed are respectively 150 ±15 Nm and 130 rpm. For this particular truck manufacturer, the assembly process of the 3-piece system is the bottleneck operation of the assembly line. A 1-piece system is highly desirable because it would eliminate the bottleneck operation, which would increase the overall efficiency of the entire assembly line. 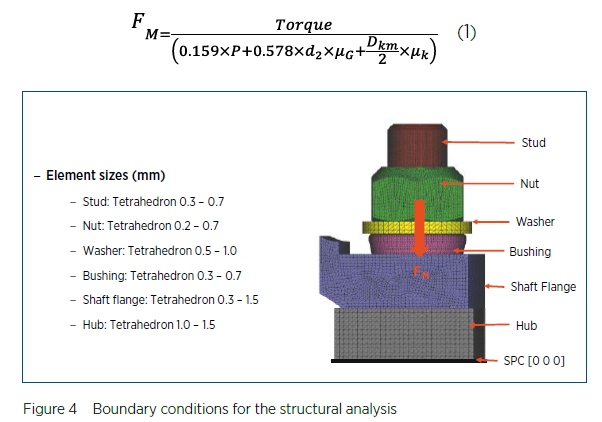 The goal of the Finite Element Analysis (F.E.A.) was to understand how the parts interact with each other during the assembly process and identify high contact pressure areas. Figure 5 compares the calculated contact area versus the actual contact area. The virtual model showed good correlation with the real life system. Based on the F.E.A. results, it was possible to understand that the coned bushing acts as a spring lock mechanism to prevent the stud from rotating against the hub when the lock nut is removed. Moreover, the contact between the conned bushing and the stud takes place only on the on threaded outside diameter (OD) of the stud. This contact pattern eliminates the risk of damaging the threads during the assembly process. More than likely, this is the reason why the stud presents a non threaded OD instead of being completely threaded.