How Means has developed new tools for transmission engineers to reinvent the design
of efficient and compact electrified propulsion systems.

Thousands of solutions for a handful of critical challenges. That’s one way to characterize the automotive industry in the 21st century.

Figuring out how to get a person from point A to point B as efficiently, inexpensively, and now as cleanly as possible, should be a relatively straightforward proposition these days. We’ve had over 100 years to figure out the best propulsion system architecture for moving a vehicle down the road, yet the spectrum of solutions remains overwhelmingly vast. Meanwhile, the cost of these systems continues to climb. And the gamut of global and regional regulations which must be adhered to? Convoluted at best, as the complexities continue to grow.

So where does one start? Many OEMs take the approach of improving on existing technology. This can be an attractive approach because current powerflows are time-tested and vetted, with billions of miles driven as validation. The problem with this approach is the fact that any future gains at this point are incremental at best, where capital is invested on marginal improvements providing only fractional MPG gains or emissions reductions.

A potentially more attractive solution is developing entirely new technology, exploring new frontiers and disrupting the entire landscape. However this can be a daunting journey to undertake for established suppliers, which must manage the risks of launching new projects that are not yet time tested and potentially cannibalize legacy business, all the while navigating the subsequent overlapping investment in the old and new.

The Journey Begins
Means first entered new space over 20 years ago by launching the Mechanical Diode (MD) One-Way Clutch, a strut-based system that mechanically locks instead of using friction. The technology was successful because it was easy to integrate, was more torque dense, able to run at higher speeds, and resulted in reduced drag torque. The MD played a key role in helping propel the 6 speed automatic transmission from a niche product to a staple of the global automotive industry.

An innovation to take this to the next level was the Controllable Mechanical Diode (CMD), a Selectable One-Way Clutch (also known as a Two- Way Clutch) that expanded the options to multi-modal controllability. This new system offered OEM transmission manufacturers a solution that would reduce system mass, improve efficiency, and offer additional packaging flexibility. Use of a CMD can result in about 100 W energy savings at freeway speeds, when compared to a Roller / Friction Pack combination. Today this technology can be found in 8, 9 and 10 speeds being produced around the world. For the GM version of the CMD that went into the 9T50 Hydramatic transmission, Means won a GM Innovation Award in 2016. Means has now shipped over 40 Million MD and CMD clutches to date.

New Age, New Answers – Electrically Actuated Clutches
But as we approach the next decade, the answers of the past simply won’t be able to address the same questions anymore. While some regions will cling to ICE propulsion, others are embracing the race to electrification like never before. No one yet knows what the winning solution will ultimately be, so multiple paths must be explored to ensure viability in the new mobility landscape.

One of the new answers that Means is working on is a static, electrically actuated CMD (CMD-e) which provides the unique benefits of latching in state and not requiring a constant power supply. Because an electric motor is present in such propulsion systems, precise synchronization is achievable which minimizes the benefits of a passive overrun strut set and allows for two independent controllable locking elements to be used.

Independent control of each solenoid allows torque transmission in the clockwise (CW) and freewheeling in the counterclockwise (CCW) direction, or visa versa. Simultaneously engaging both solenoids creates the clutch brake function (no-way clutch).

See Figure 1. Means’ new static CMD-e design can improve system level efficiency in two ways. First, hydraulic control is completely eliminated, along with all of the cost and complexity associated with it. Second, power is only consumed during state transition. The solenoids are bi-stable, meaning they latch in state which eliminates the constant power demand. Once the locking element engages, power is removed and magnets in the solenoid hold the plunger in place. Because the locking element is torque locked, the magnetic latch does not have to be large. 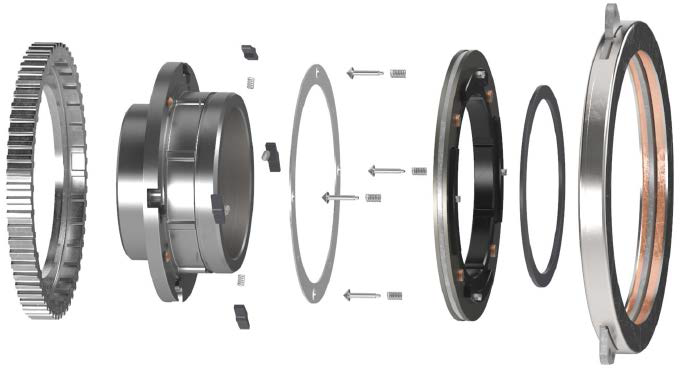 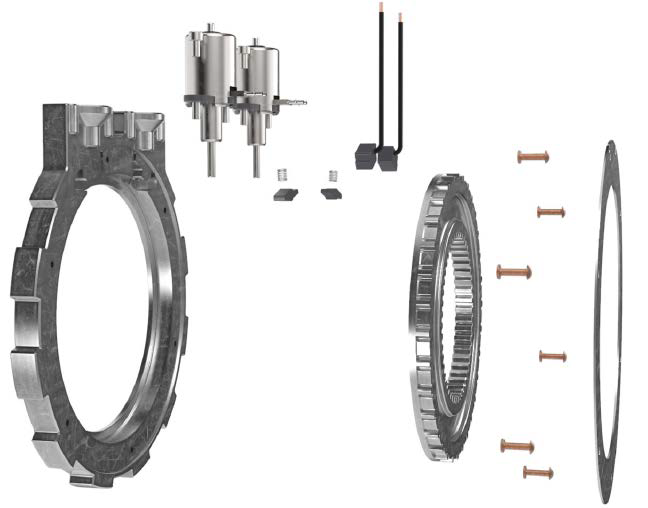