At Total Lubrifiants, we have always worked hand in hand with our customers to develop tailored solutions that meet their specific needs and guarantee optimum operation and maintenance for their vehicles and equipment.

The Challenges of the Energy Transition
The energy transition is now clearly under way and regulatory constraints are impacting the automotive industry like never before, requiring non-stop innovation.

With the growing concern over tailpipe emissions prompting stricter standards for carbon dioxide and pollutants like nitrogen oxides, unburned hydrocarbons and particulates, hybrid and electric vehicles are no longer on the fringe. On the contrary, they represent the next big wave of automotive technology.

Battery costs have declined 75 % over the past five years and nextgeneration powertrains are delivering improved performance. The automotive industry has taken assertive action to capture the trend and is devoting virtually all of its R&D spend to electric vehicles (EVs).

There were around three million EVs on the road worldwide in 2017. According to various scenarios, EV sales are expected to account for between 10 and 50 % of the light vehicle market by 2030.

New Configurations from OEMs
In all-electric vehicles, there are two configurations for lubrication. In the simplest and most widely used configuration, air or ethylene glycolbased water coolant is used to cool the electric motor via an indirect cooling system with a heat exchanger. Fluid is needed only to lubricate the mechanical transmission, which in an electric vehicle is the reducer. Unlike internal combustion engines, electric motors have a very large operating range (up to 20,000 rpm) and reach peak torque almost instantly, so there is no need for a multi-speed gearbox. In the second, more complicated, configuration, fluid is used as a coolant for the electric motor – and even the power electronics and battery – as well as a lubricant for the reducer and electric motor bearings.

Since the fluid will be in direct contact with the components to be cooled, it will also serve as a coolant. As a result, a more comprehensive strategy is needed for formulating the products that will be used for these specific applications.

Hybrid vehicles combine the constraints described above with the traditional constraints of mechanical transmissions. Those include managing synchronizer friction in manual and automatic transmissions, as well as friction in all applications with clutch systems, such as dual clutch transmissions and torque converters.

TOTAL QUARTZ EV FLUID and TOTAL RUBIA EV FLUID have specific properties that allow them to withstand these technical constraints of electrification.

Dielectric Properties
Very specific electrical properties are required when a vehicle is equipped with an electric motor and when lubricant comes into contact with the motor’s components.

Four factors are taken into consideration when assessing a lubricant’s dielectric properties:

››Dissipation factor, or loss tangent. The loss angle (δ) measures the difference in phase between the alternating current applied across a material and the resulting alternating current passing through it. In dielectric materials, the loss angle (δ) is often small and used interchangeably with its tangent (tan δ ∼ δ), which translates the energy dissipated by the Joule effect. Temperature rise is therefore directly related to the value of δ. Typically, the loss tangent (or tan delta) of a transmission fluid is around one at room temperature. A good insulating oil should maintain a low tan delta.

These dielectric properties need to remain stable over time even though an oil may be degraded by higher temperature, oxidation, humidity or dust particles. 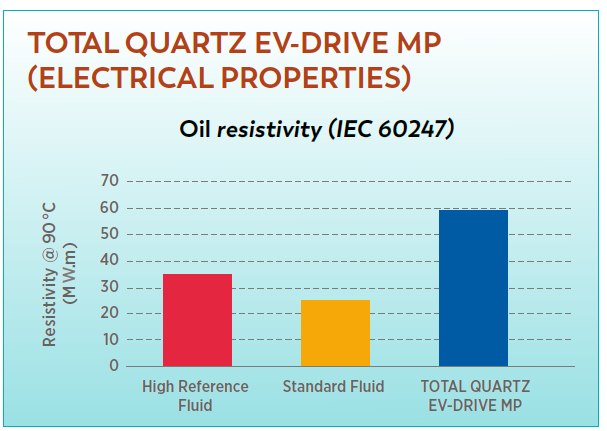